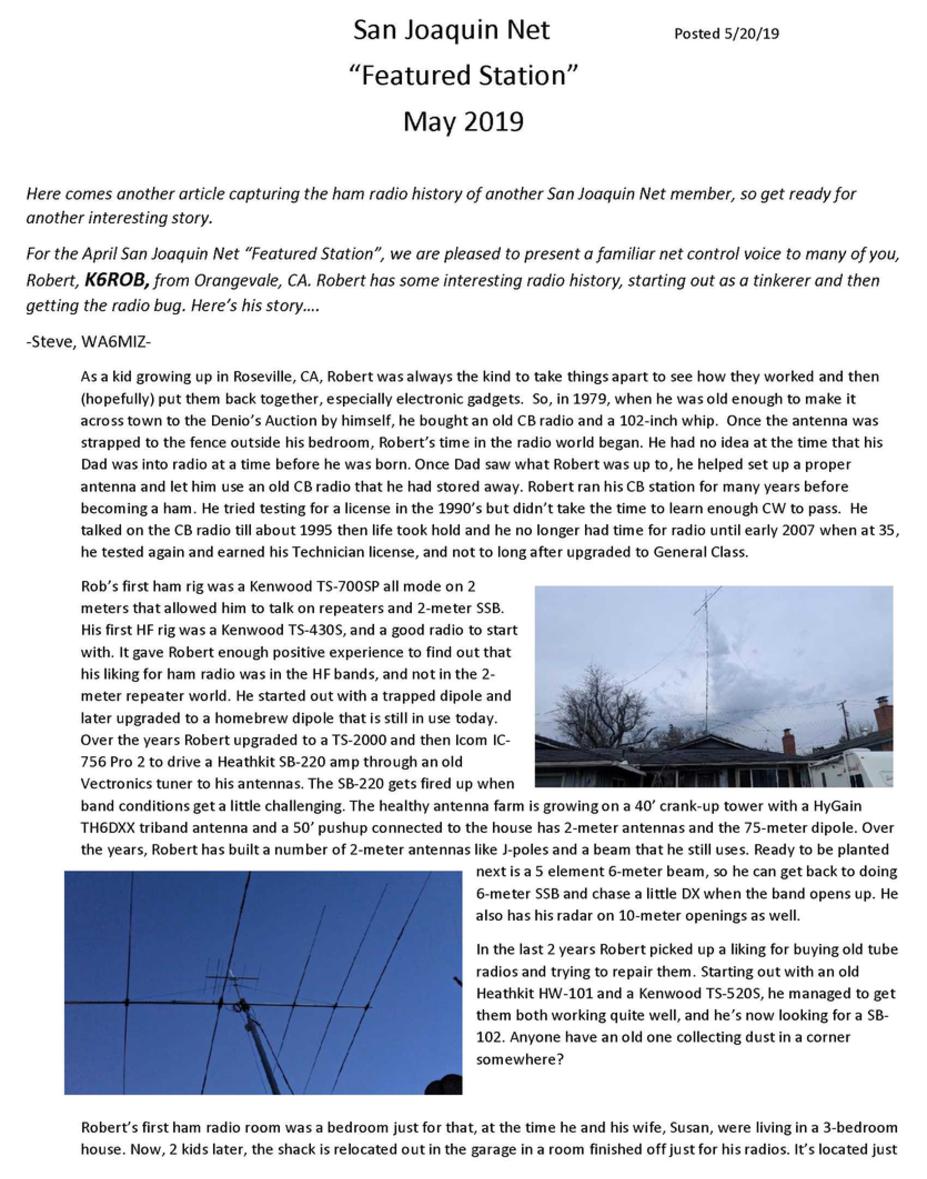 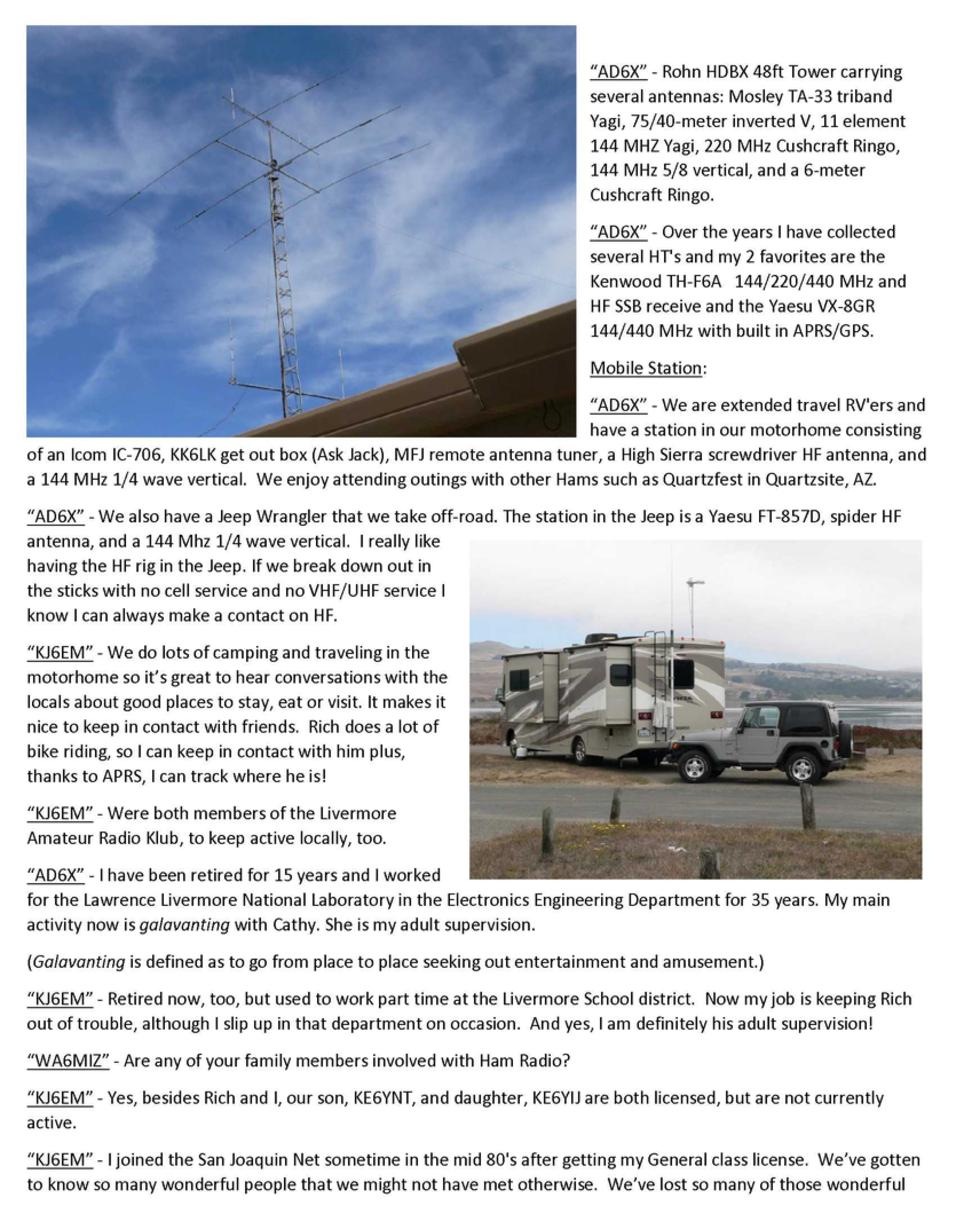 March 2019
Here we go again with another opportunity to check out what other members are up to that check into the San Joaquin Net. Ever thought about what that guy or gal with the melodious voice looks like if you haven’t attended one of the annual picnics in May? What about the equipment they are using for that blasting signal? Is it the rig or the antenna or both?  What the heck got them interested in this fabulous hobby anyhow?
This article is part of a series that will give you the opportunity to meet some of the Net Members through a little more interesting detail than just our on-the-air conversations. You might even learn about some common activities that generates an on-the-air contact for a more in-depth rag-chew.
For the March 2019 San Joaquin Net “Featured Station”, we are pleased to present a very active member of the San Joaquin Net, Charles “Chuck” McConnell, W6DPD, from Fresno, CA.  As with many of us, Chuck began his interest in ham radio as a youngster. Here’s his story….

Chuck spent many years chasing DX and he is at the top of the DXCC Honor Roll with 340 DXCC confirmed.  There are 14 deleted entities and 52 entities on 6 meters Plus, he has earned DXCC on 20, 17, 15, 12, and 10 meters.  Other awards are Worked All states on 40 through 6 meters and WAC on SSB and Digital, and WAZ.  run the VE program for the Fresno ARC.  For all of you contesters, he really likes “Log Book of the World” for confirming contacts.
As a very active ham, Chuck has served as ARRL San Joaquin Valley Section Communications Manager (now Section Manager) from 1976 to 1989 and from 2002 to 2012. He served as ARRL Pacific Division Vice Director in 1989 and as ARRL Pacific Division Director from 1990 to 1993.  Being the ARRL Director allowed him to attend a number of events around the United States and to visit Hawaii.  He currently holds the position of Past Director.  His extensive ARRL activities has Chuck belonging to the ARRL Diamond Club Gold, and the ARRL Maxim Society.
Here’s a list of the organizations for which Chuck is a member: ARRL, QCWA, Fresno ARC, Clovis Amateur Pioneers, 10-10, Central California DX Club, Northern California DX Club, Northern California Contest Club, Old Timers Club, A-1 Operator, Western Public Service System, and of course the San Joaquin Net.
With all the amateur radio exposure in Chuck’s family, his son, John, became a ham, first licensed in 1989 and upgraded to Amateur Extra in 1995.  His call sign is K6ESL.
While teaching at the middle school, Chuck had the very rewarding experience of interesting several students to become Novice Class operators. Local hams donated equipment and there was a station set up for them to operate at the school.  The activity even got coverage with a special article in the Fresno Bee Newspaper.

Chuck taught middle school in Fresno for 34 years and retired in 2001.
Now, you can find Chuck operating primarily operating SSB, RTTY, PSK, JT65 and FT 8 modes. Chuck particularly likes the current digital modes because of the advantage for weak signal to get through. Listen for Chuck on the San Joaquin Net as a very regular member for many years. 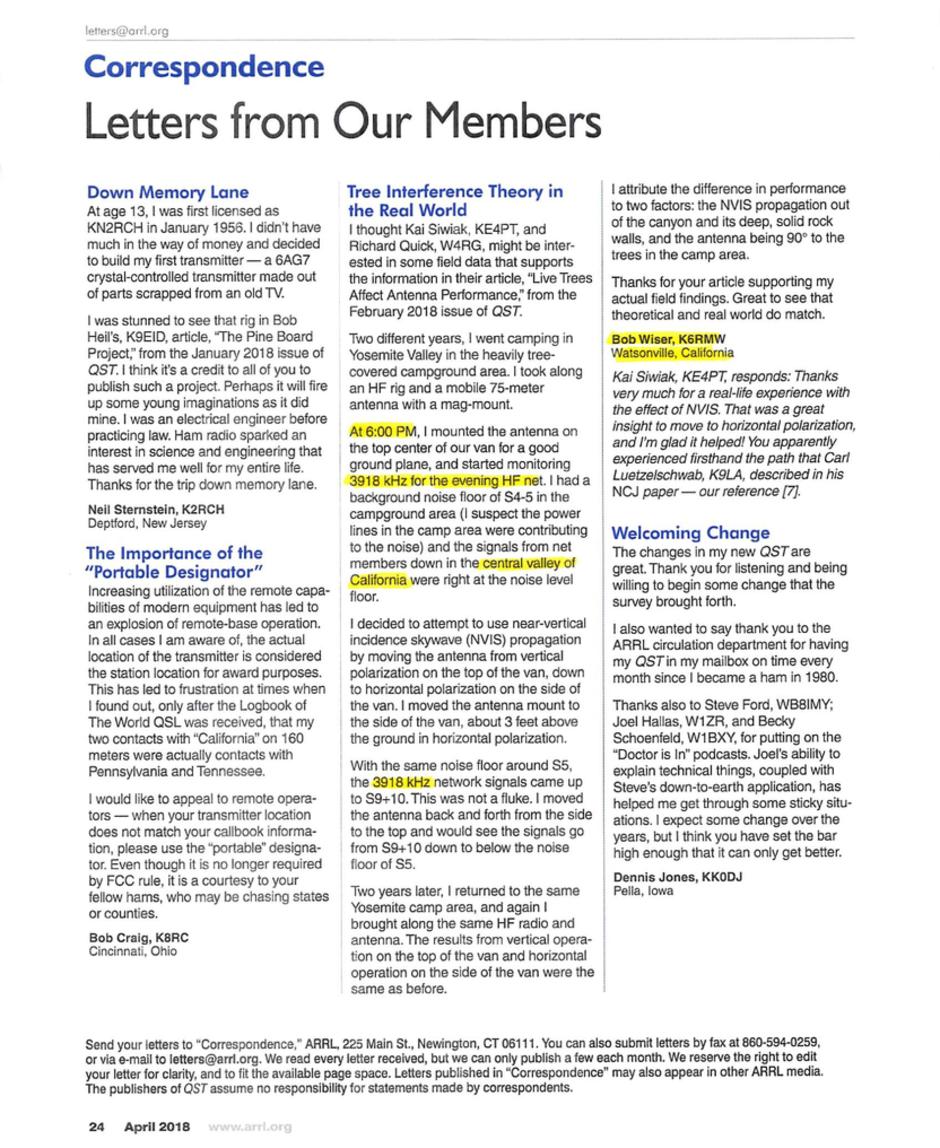 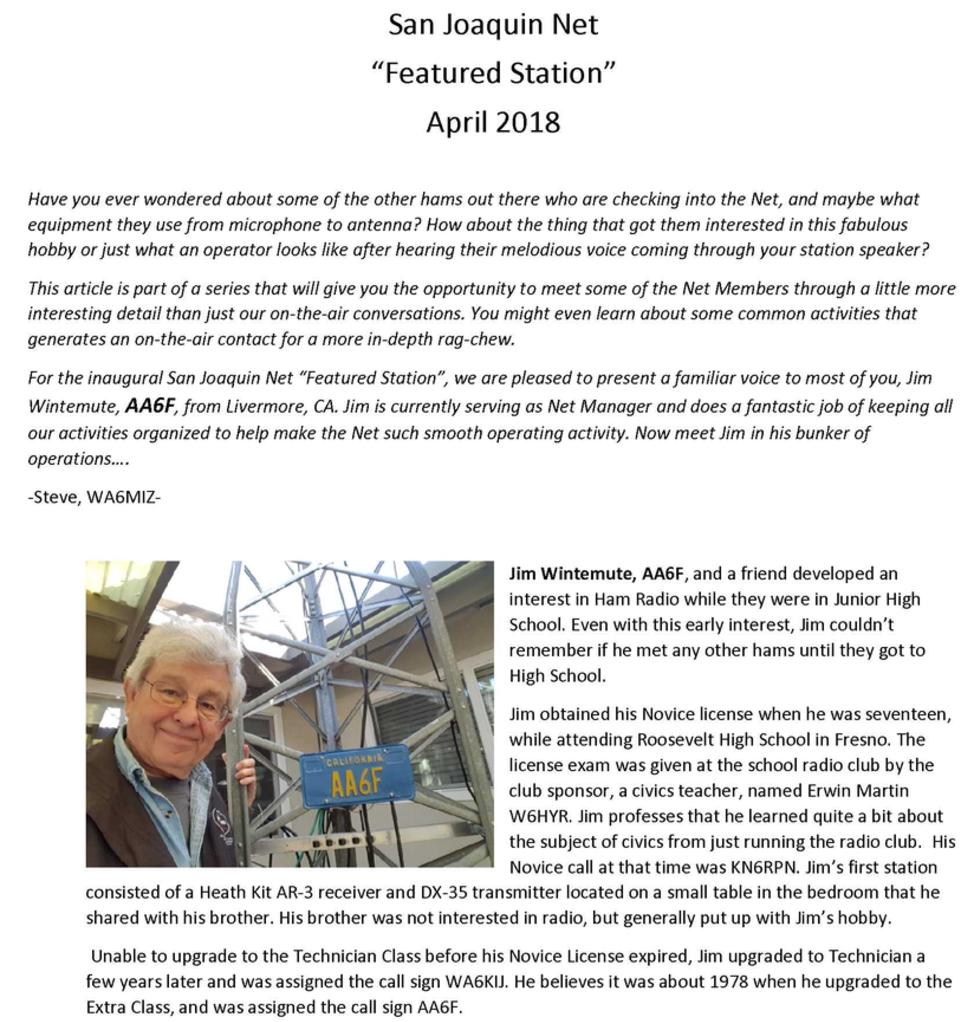 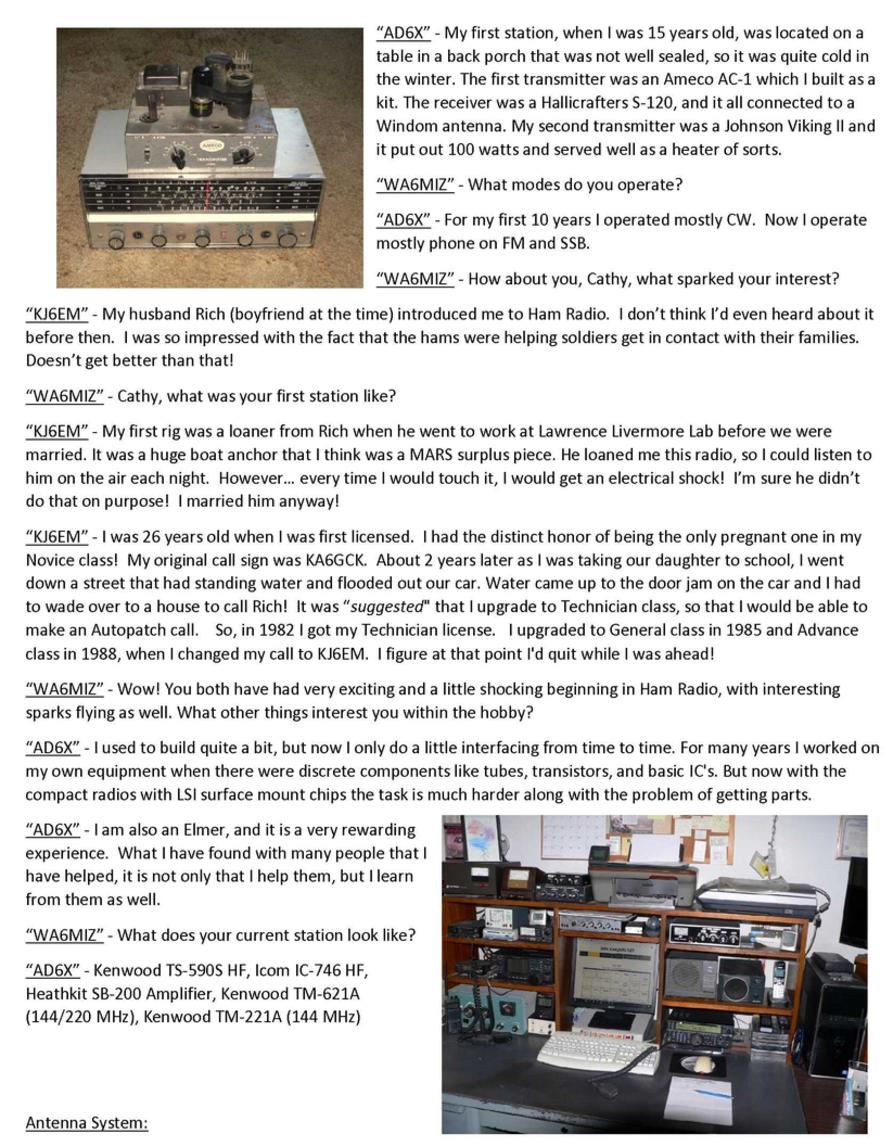 WB6FEH, Bill Mercer and Net Manager AA6F,  Jim Wintemute have been discussing the importance of preserving San Joaquin HF Net history on our website. Bill has been digging through Mercer Family files to share some memories of the past.

Bill, WB6FEH comes from a "ham family" that included his dad Dick Mercer, WB6OTB; mom Laura WB6FCX and Evelyn WB6MHA. WB6OTB and Bud Odgers, WA6OVE had a friendship that dated back to late 1945. Bud's involvement with ham radio was influential in the Mercer family's amateur radio interest and ultimate licensing in the latter part of 1962 and the early months of 1963. Bill remembers Bud's 1960 shack in El Portal well. It included a BC-348 Signal Corps receiver and a Multi-Elmac AF-67 transmitter! WB6OTB became a Silent Key in November of 2012 and WB6FCX was (SK) in January 2017.

Bill, a newly licensed General Class, began checking into the SJN sometime in 1964 using AM phone - the prevalent voice mode at the time. His rig was a Gonset G-76 "transceiver"! In 1967,  Bill went off to Cal Poly and he purports that although his net involvement diminished during a period of time,  he never was completely inactive. Today, Bill is the only remaining active ham in the Mercer family.

The first of the WB6OTB photos featured below were mostly taken mid-1960s, the last one being taken in 1987.  The later photos were taken after Bud WA6OVE's memorial service in Mariposa in December 1999.  Bill promises to continue the search for old SJN photos found in boxes that he will share with our membership. Thank you, Bill, WB6FEH! 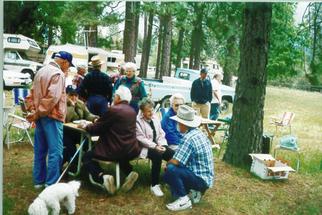 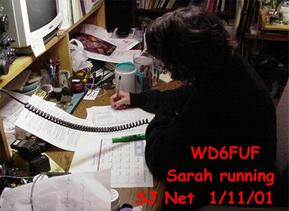 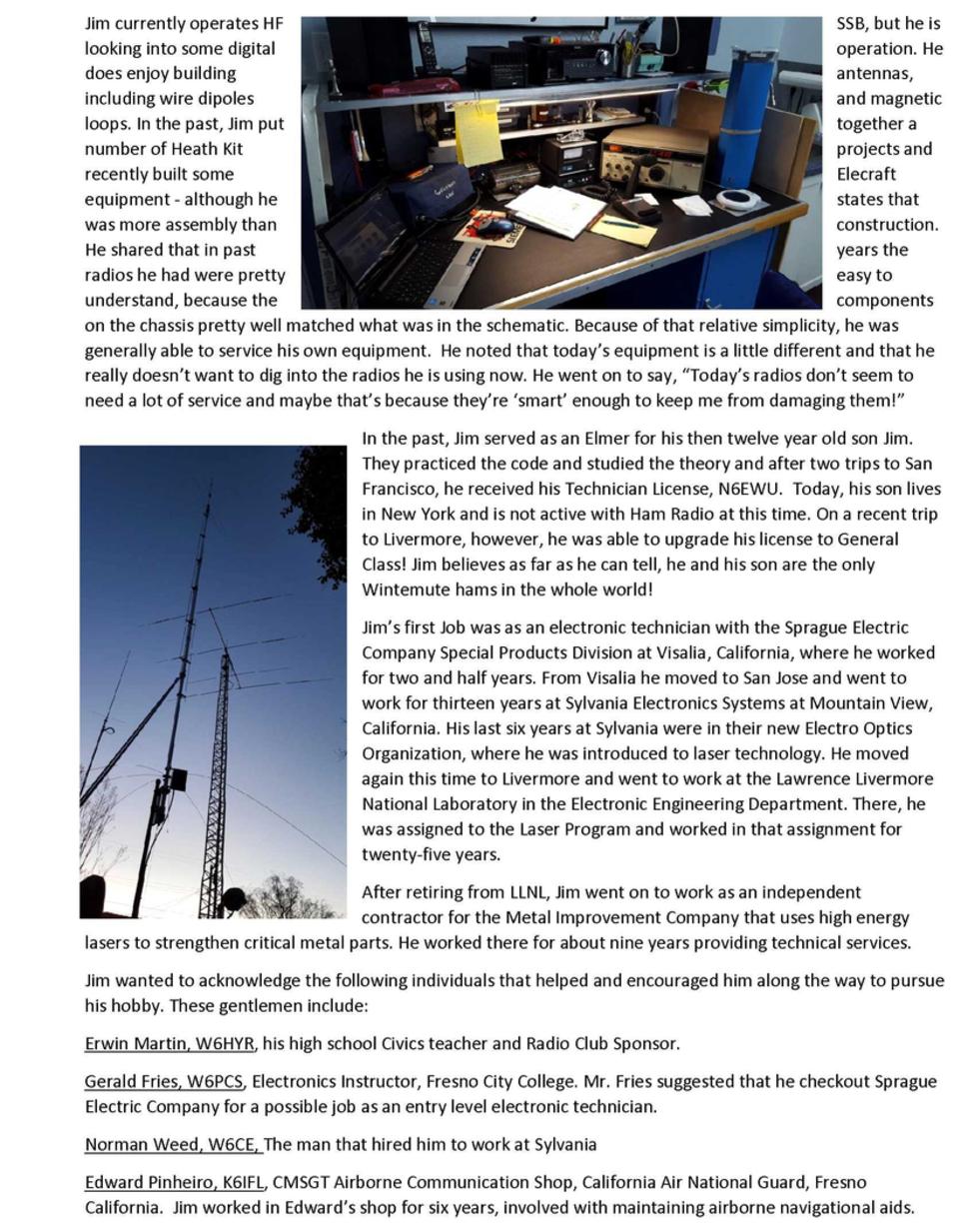 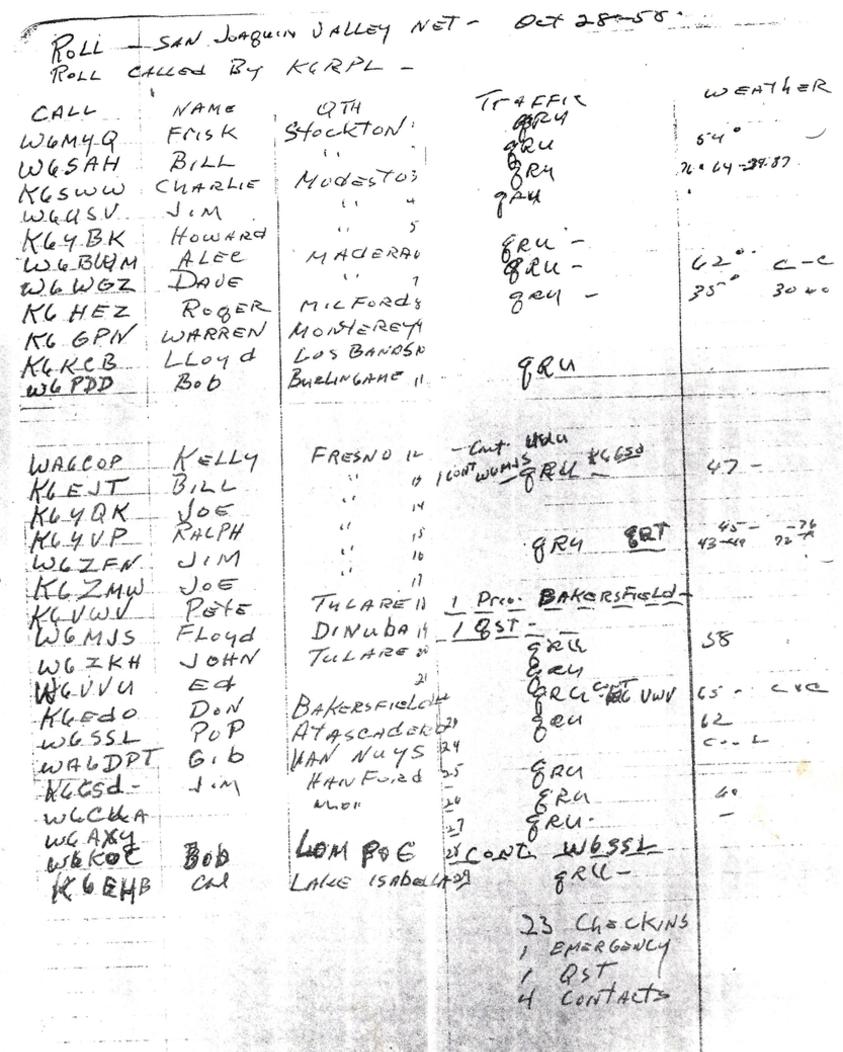 Roger Corum, WD6CNV shares a personal account of how he first became interested in Ham Radio. I'm sure many of you will recall your early days with a cat whisker crystal set! CLICK HERE to read Roger's account. 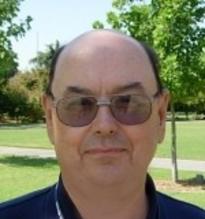 For this second San Joaquin Net “Featured Station”, we are pleased to present a familiar voice to most of you, George Stevans, K6SNA, from Modesto, CA. George is a long-time member to the net with plenty of ham radio experience.

After initially copying CW on a Hallicrafters S-40 receiver to learn the code, George ordered and build a Heathkit AT-1 CW transmitter at 25 watts to get his Novice station on the air. Then he traded for a military surplus BC-348 receiver to round out his station.

During past operation, George has utilized dipoles for HF operation and beams on two meters. After upgrading to

Conditional Class, getting on voice was very desirable, so he hooked up a modulator to his AT-1 and started

transmitting his “you betcha” commentary across the airwaves. The next equipment upgrade took George to a

Central Electronics 200V​ transmitter and a National NC-303 receiver, then later to a Swan 500C transceiver.

Somewhere in the many years of past experience, he even dabbled in a little RTTY operation for a period

IC 2400A Dual Band  VHF-UHF transceiver for regular ragchews with local hams, in addition to participating on

located right outside his shack.

Over the years, George has spent much time devoted to the support of amateur radio. After graduating from

San Francisco State, he began a 3 ½ year assignment in 1959, broadcasting at ARRL Headquarters in New Hartford,

Connecticut. And of course, he has been an ARRL member continuously since 1959. Then upon returning to California, George worked with a

security firm for many years. During that time, he was also very active as Director of Air Force MARS for five years from

1969 – 1974. Initially, his MARS call was AFA6SNA and at the end of his service he was issued the permanent Senior Call of AFZ9WQ. During his MARS years, George was interviewed by the Modesto Bee providing insight on the important operation of the Military Amateur Radio Service.

Incidentally, George sold his original AT-1 years ago for $25 to a local ham who “just had to have it.” What a deal for another ham to have all those years of operating experiencing connected to that one of a kind rig!

In addition to being an active member of the San Joaquin Net for many years, George also belongs to a few local ham clubs in Modesto and Turlock where he is very well known as solid member of the local amateur community. Over the years, he has actively helped with exams offered to prospective hams through the local clubs.

Unfortunately, George is the only member of his family deciding to join the ham radio community.

We are certainly pleased to have George as a longtime member of the S.J. Net to show the continuing comradery of the membership over the years. 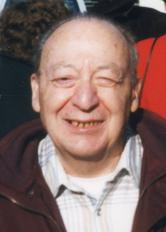 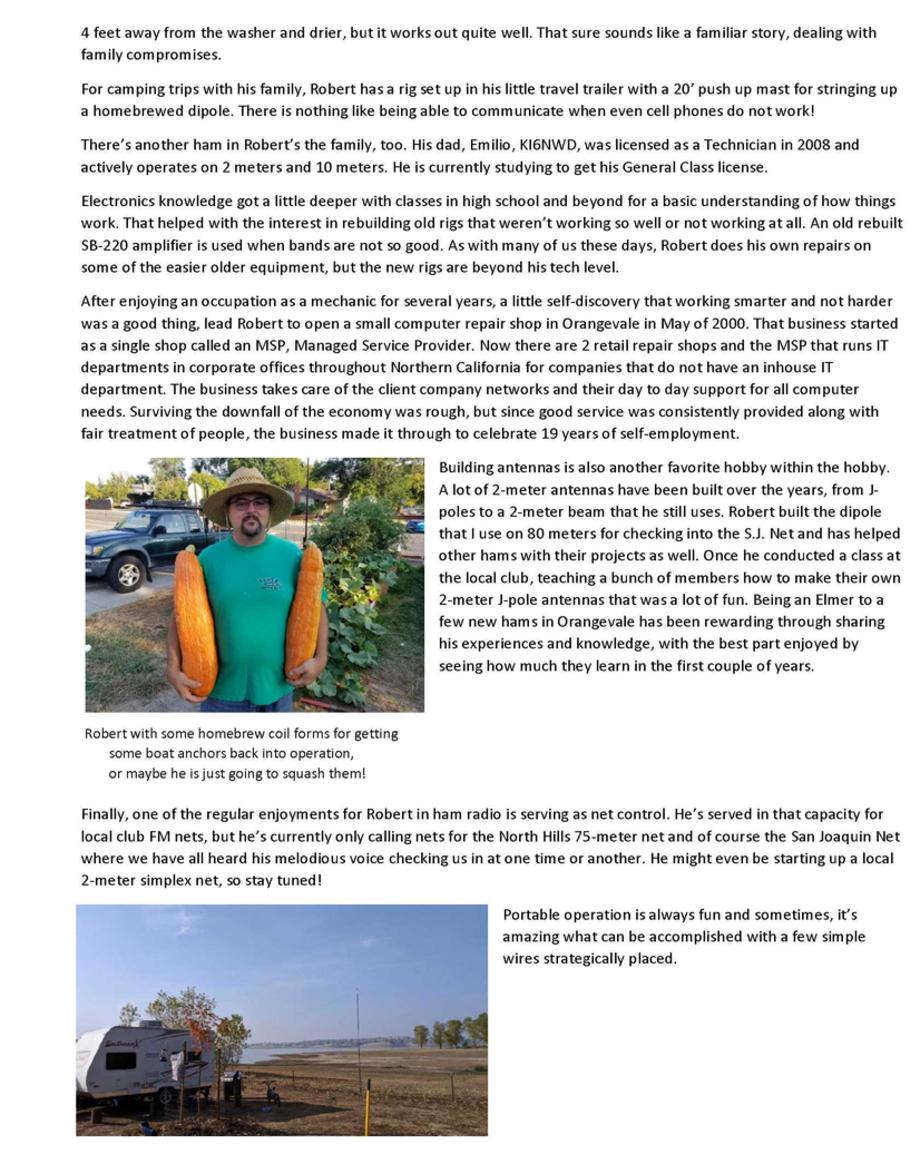 A Walk Down Memory Lane 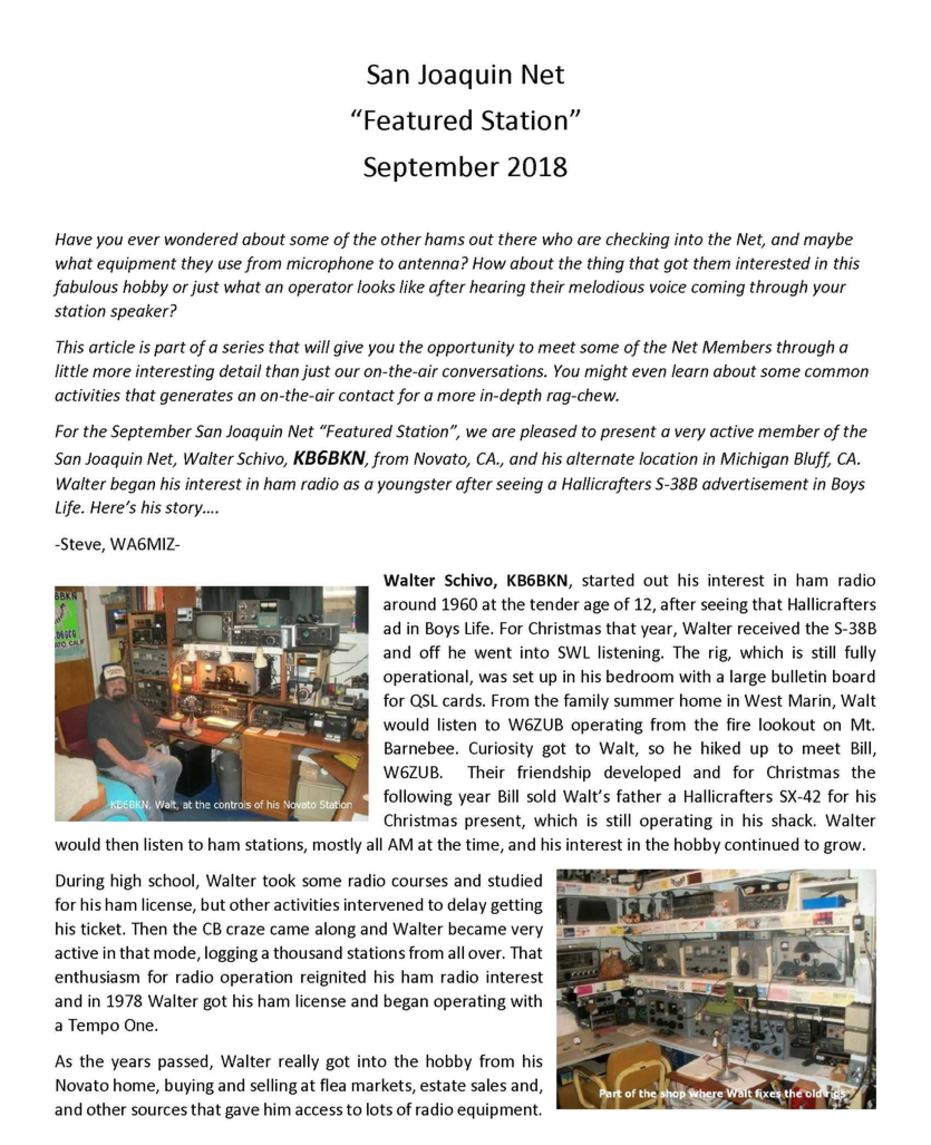 Not being content with the Tech operating limitations, Carl quickly graduated to General Class in 2012. Now it’s time to get more serious with gear, so his shack became adorned with a Yaesu FT-897D connected to an Antron antenna (a CB Big Stick) up at 20 feet that reached out to the world on HF.

Carl says, “Talk about fun, this hobby is addictive and I love it!”

As a General, with seven years’ experience, he has continued his station improvement to incorporate an Elecaft K3 with antenna tuner, pan adapter and a 500-watt amp. This all leads to a Force 12 beam for 10 and 20 meters on a 55-foot tower. Then off the sides of the tower is a dual fan inverted vee for 40 meters and 75/80 meters.

After getting his base station pretty well set up, there became the challenge of wanting
to continue operation while mobile. That meant becoming creative to fabricate all the
installation parameters that goes into a mobile installation with every one being a unique
learning experience. After many hours of planning, cutting, drilling, and strategically
routing critical wiring, Carl finally got on the air with his mobile station consisting of a
Kenwood TM-V71 covering VHF/UHF and a Yaesu FT-891 for HF. With the help of a Yaesu
FC-40 tuner and a 102” whip, he’s successfully dialed-in for operation on 40 – 6 meters
on all four wheels!

When he’s not conducting business on the San Joaquin Net, you can usually find Carl

as a regular on the Noontime 40-meter net at 7.2835  MHz. Otherwise he enjoys working
special event stations, contests, and he chases IOTA’s (Islands on the Air). Between his busy operating schedule and obvious commitment to “honey-do’s” around the homestead, Carl somehow finds time as an active member of the Paso Robles Amateur Radio Club and the local CERT (Community Emergency Response Team).

With all the other ham radio interests Carl has going, he’s becoming quite proficient with CW and is now at 13 WPM thanks to studying for 2 years with a local Elmer (an unfortunate SK). As he progresses to become a real brass pounder and increases his proficiency in that unique language, we may hear his CQ one of these days and have a memorable, old fashioned CW QSO. I know I look forward to that opportunity! 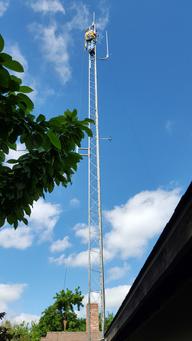 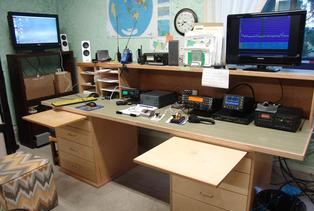 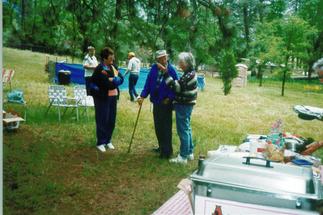 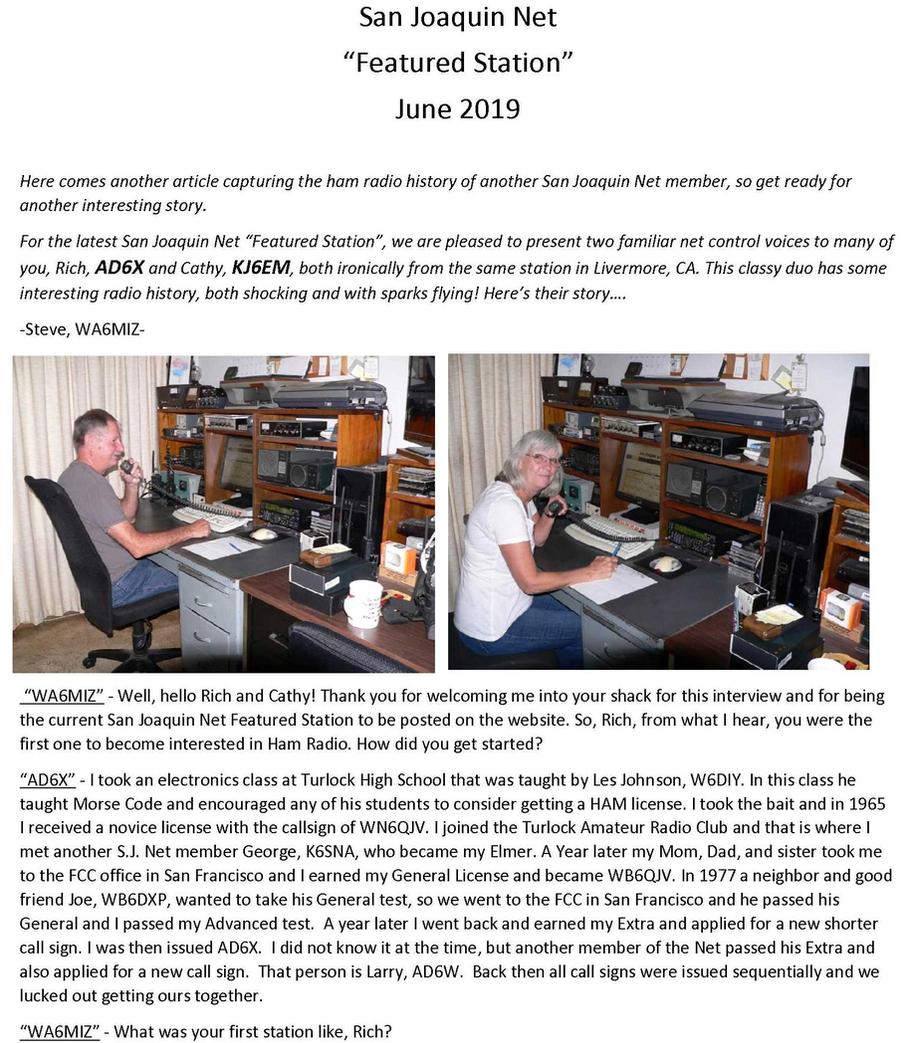 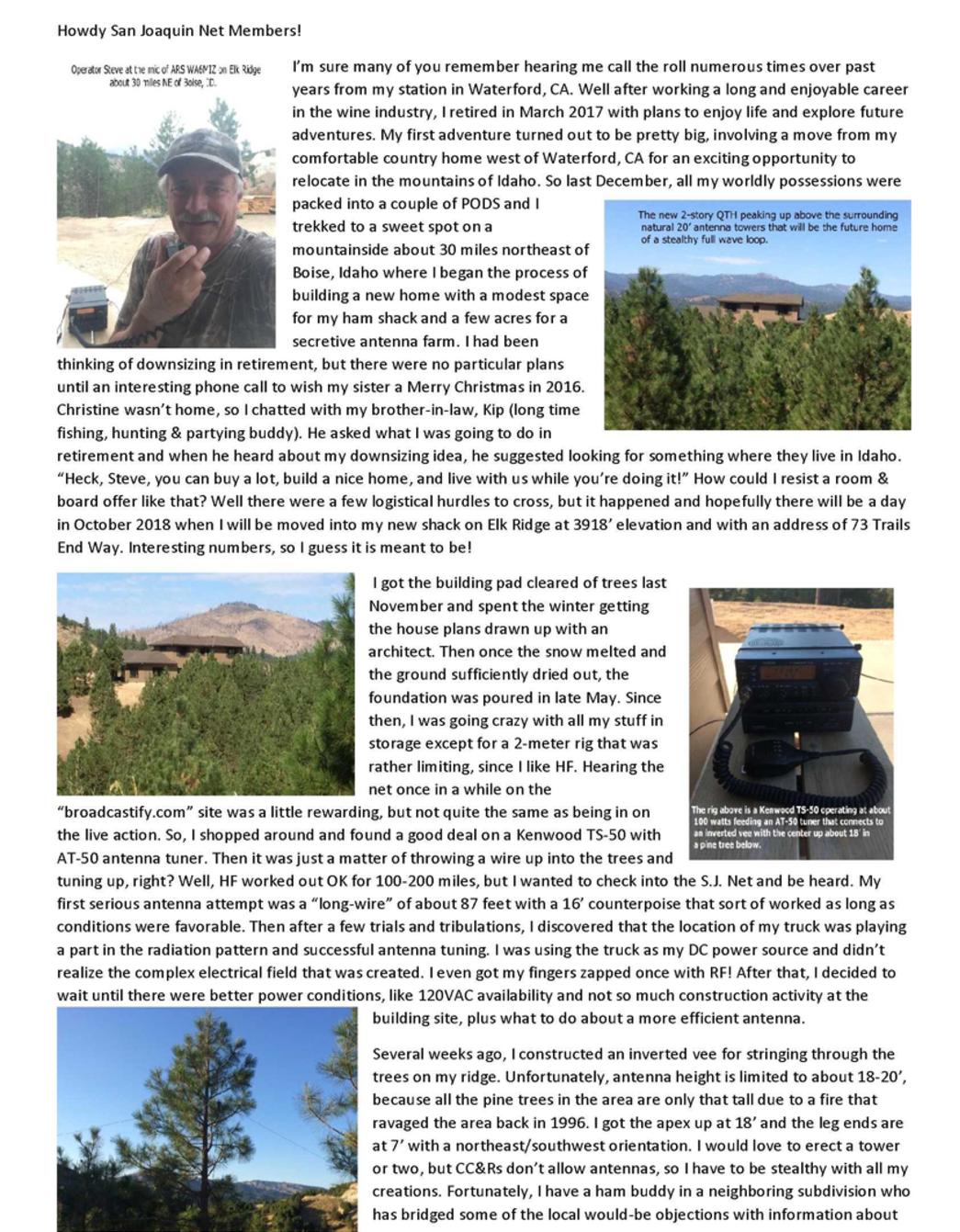 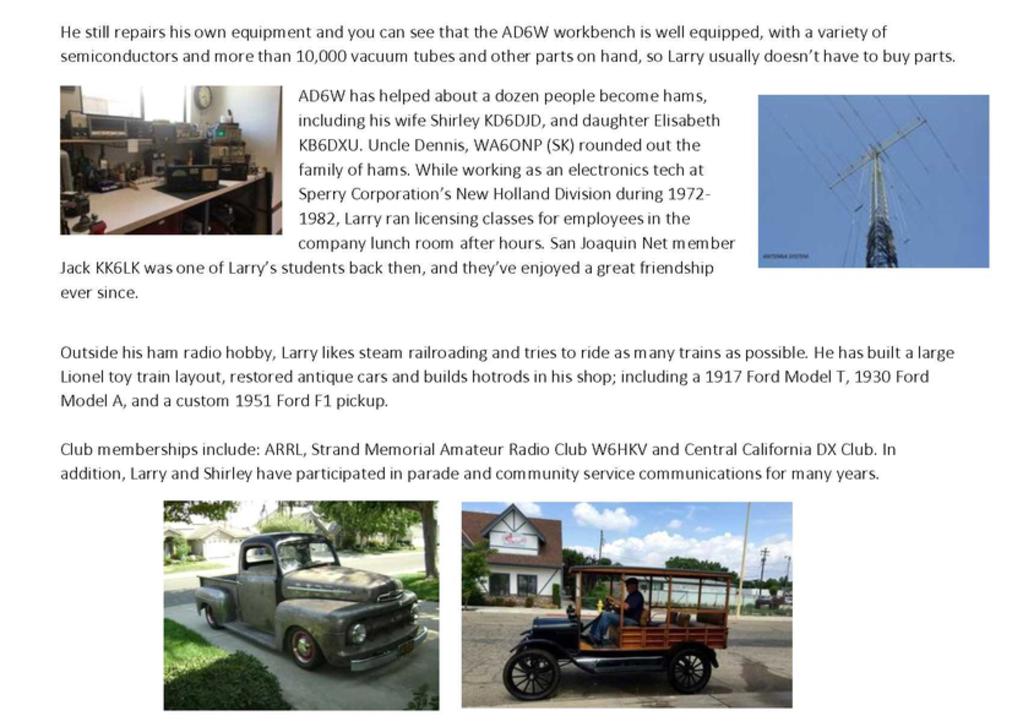 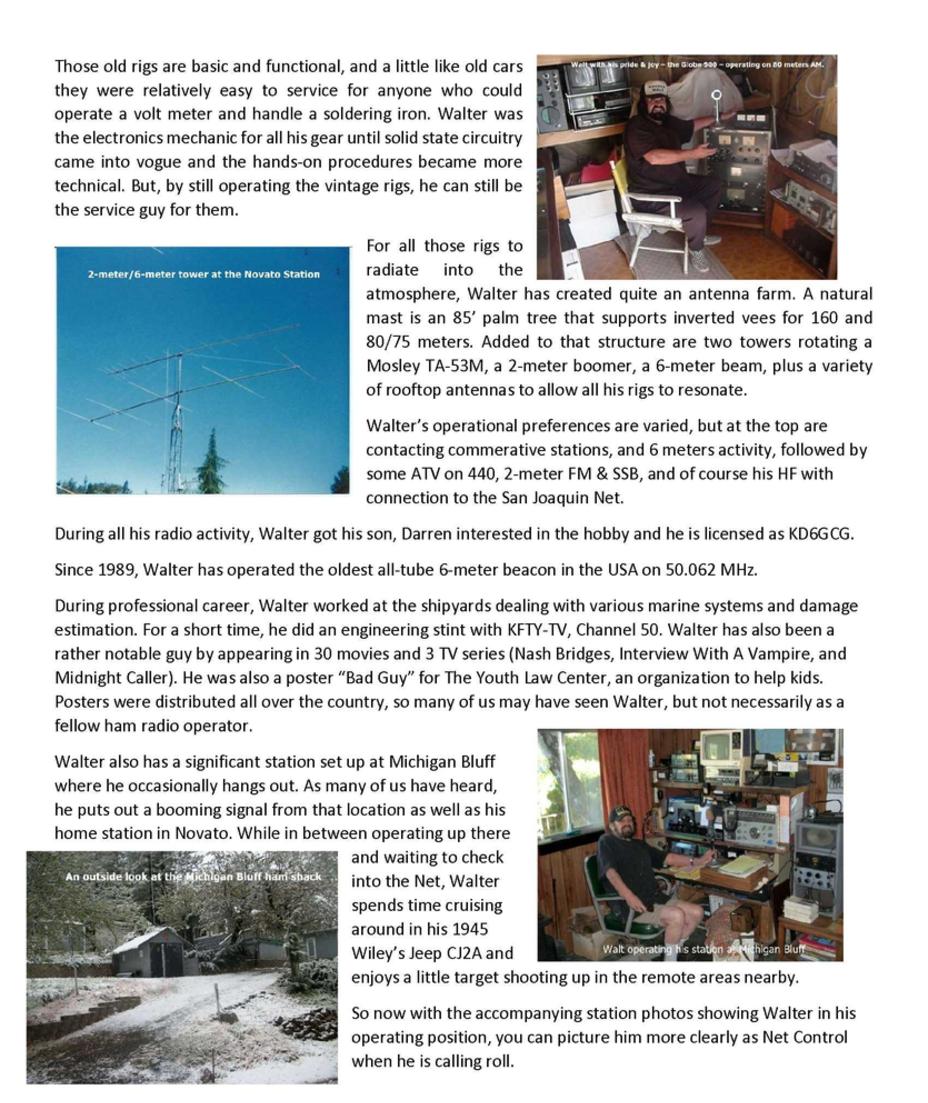 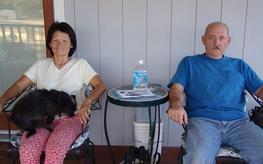 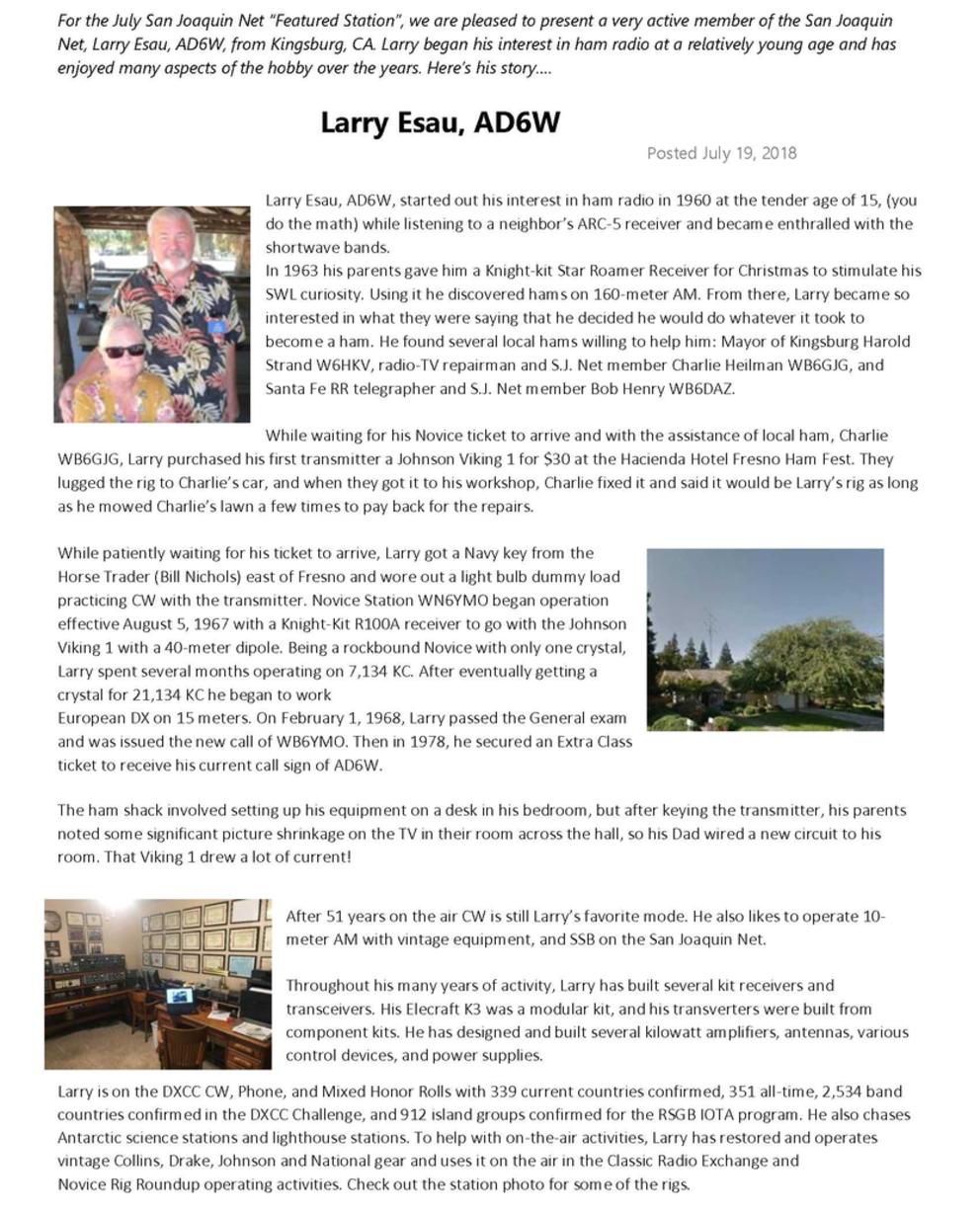